OK.  In doing this, I feel like a Judas, but a recent article in the Daily Mail stated that “Ms Tee’s general description of the time and place was vague” [1]. It also says I discredited myself subsequently by publishing my own thoughts on what I thought happened after I saw it, but I’ll leave you to be the judge of that, since you have bothered to find my blog and actually read it.

Yes, my initial publication was vague.  I hadn’t really thought about it, and when I realised that what I had seen might indeed have been MH370 I just blurted it out.  I had no idea about how big this thing was, and if that sounds geopolitically naive, I agree fully. After all, my husband and I moved onto a boat and started cruising to try and escape from the political bullshit that surrounds most peoples lives. Remember, after arriving in Phuket, I had been living alone on a yacht at anchor with no A/C power whilst my husband was away for five weeks at a conference in America and his own work in Kuwait.  Any limited internet access I had was used to communicate with him, as we were trying to fix our marriage after what had been a very stressful passage, resulting in me packing my bags.

Although I had thought about this plane I saw every day, I refused to acknowledge its significance, choosing to believe what I had initially been told about it heading off to Vietnam.  After that I heard very little about the matter since I was burying my head and refusing to show an interest, although it did bother me whenever I heard people speak of it.  Which wasn’t that often, since I also avoided people on the whole.

After the twenty minute phone call from the ATSB on June 3rd, I started to reflect on points which had arisen.  At that stage I could not be certain of the day or the time, except that it was the middle of the night.  However, after the phone call I did recall that the crew who was asleep on deck had woken up due to the sails flapping after I went into an accidental gybe, and it was at HIS suggestion that I turned the engine on. Despite the dying winds, I had resisted until that point since I didn’t want to wake anyone, having deprived them of sleep over the previous week due to my bad behaviour. 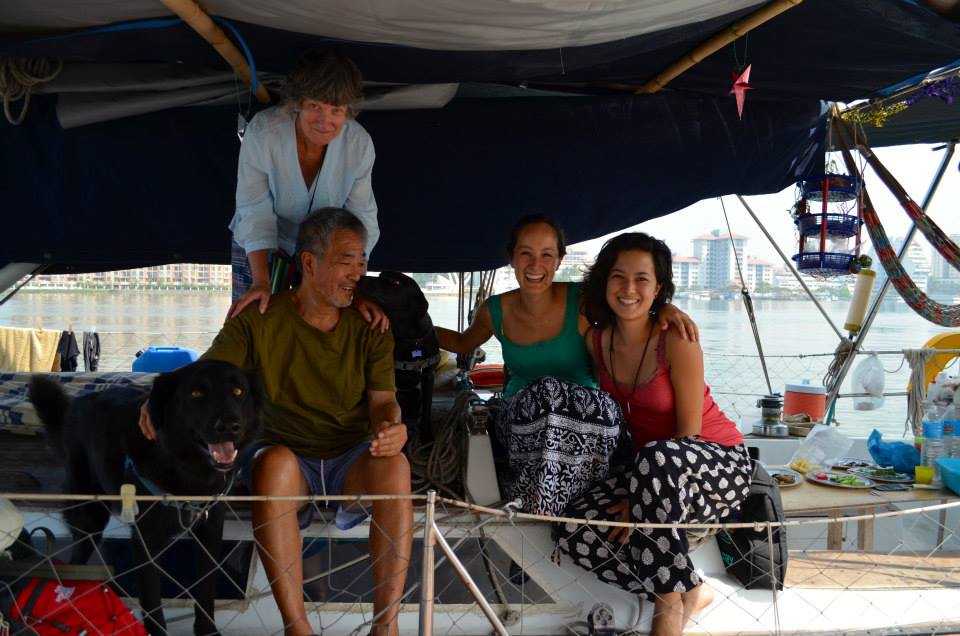 I went below to turn the engine on, and as I came back up, I pointed to the plane, by now progressing away from us (we could see the BACK of it) and asked him about it.  I plainly asked him why it was glowing like that.  His response was that he didn’t know, he had never seen anything like it before.  He had previously been an aeronautical engineer, and before becoming a teacher he had worked as an air crash investigator for Saudia Airlines, so I assumed that if it was a plane in distress he would recognise it as such.  So I put it down to a magnificent airshow – after all, there were no fighter planes in pursuit, a thought which I processed at that time.  So I wasn’t concerned.  Not then.  His comment laid my fears to rest.

When we arrived in Phuket and were talking to Marc’s son, Tris, I described what I had seen. And at that stage, stood outside the immigration office in Chalong, Guy replied that he did remember a very odd aircraft. Hm.

On June 12th I notified the ATSB via email that this crew member had also seen it:

I received no acknowledgement of this email from ATSB, not even to ask for the identity of our crew member.  They did not approach him independently either.  I did try, several times, over the next few months to contact him and his wife to ask him to come forward.  My emails and Facebook messages on the matter were all ignored.

In December my husband and I booked a flight to visit him and his wife for the day.  We were invited for lunch, and at this stage the crew member told us that although he didn’t recall seeing the plane himself, he did recall me talking about a strange military plane (he was specific about that) whilst on passage.  He also told us the reason he refused to answer my request for support was a conflict of interest.  His daughter, Rachel, was completing an intern-ship as an aviation lawyer at the time, and had been selected to serve on the compensation panel for MH370.  Since intern-ships are hard to come by, he simply didn’t want to jeopardise her job. Guy, a layperson for the Church of England, brazenly told me he would not jeopardise his daughter’s career, the conflict of interest was simply too great.

I would have preferred to publish this sooner, but refrained from a misplaced respect for his privacy.  I thought that notifying the authorities was enough (I also told most independent investigators who contacted me privately via email).  But even if you are not sure about my timings, I am.  And now you know why.

This site uses Akismet to reduce spam. Learn how your comment data is processed.